When I was writing my renegade disassembler, I spent a great deal of time taking apart the instruction encodings for GCN, and wrote a lot of code for manipulating and inspecting instructions. It occurred to me as I was doing this that I might be able to repurpose that code for something a little more interesting.

One of the problems with static shader analysis is that it can be difficult to judge exactly what the bottlenecks will be, particularly when control flow is taken into account. One can always test the effects of an optimization by measuring real workloads, but this requires implementing the entire shader in a working application. Even if you already have a working application available, implementing a simple shader change in the context of a full application can sometimes be very time consuming. It involves touching not only the shader, but also the application side object which sets up and feeds that shader. It can even involve modifying asset pipelines and toolchains.

There is value in being able to experiment quickly with different permuations of the same algorithm without having to constantly set up complete working implementations. Suppose, for example we’re contemplating moving some calculation or other into a LUT. If we can demonstrate that, under conservative assumptions, the extra ALU ops we do now are always swamped by the latency of the existing fetches, then we can rule out that optimization without going to all the trouble of implementing and measuring. The ability to “trivial reject” like this can be a significant time saver.

Pyramid now has a “Scrutinizer” feature, which can simulate shader execution on GCN, in order to more easily identify bottlenecks. The remainder of this post will function as a brief tutorial and documentation. The “Scrutinizer” is in a very rough, work-in-progress state, and I welcome feedback.

Of course, no post about Pyramid would be complete without some ranting about how I wish the rest of the IHVs would expose their shader ISAs. Seriously guys, I’ll do this kind of thing for you too if you’ll just make it possible.

First, compile an HLSL vertex or pixel shader, select ‘AMDDXX’ from the backends dropdown, then click the ‘Scrutinize’ button. You will be greeted by the window shown below: 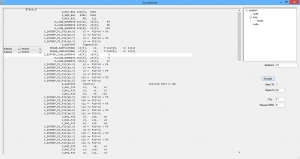 In the top-right corner is a representation of the shader’s control flow graph. Scrutinizer will do some control-flow analysis and attempt to identify loops in the shader. You can clock on the various control flow nodes to highlight the corresponding instructions.

There are various pieces of information that you can provide to help guide the simulation:

Scrutinizer will first traverse the control flow graph to figure out the sequence of instructions that the simulated shader should execute, taking into account the branch/loop information that you provided. Then, it will feed the resulting instruction sequence to a simulator which will track the execution of simulated wavefronts in a simulated GCN CU, and report some statistics. As of this writing, the statistics are as follows:

GCN is the best documented GPU architecture around, but it’s still surprisingly difficult to paint a robust picture of what goes on. I had to make assumptions as I went, which I’ll try to list here. RED TEAM: If any of your architects read my blog, I would love to get clarification on any or all of this.

There are a few simplifying assumptions we make right off the bat.

Assumption 1: No Cache Misses
This is likely to generate some eye rolling, but it is the only reasonable assumption that we can make given what we’re trying to do. Trying to simulate a real cache is using anything other than measured data is probably going to give us nonsensical results.

What this means is that any ALU bottlenecks that we identify are suspect. If the ALU/MEM imbalance is severe, then its likely that there is a real ALU bottleneck, but if its marginal, then the odds are good that your shader is not really and truly ALU bound. You need to be aware of the simulator’s limitations when interpretting its results. Eventually, I’d like to see if I can come up with a way to identify the “latency potential” of a given shader (that is, how many clocks of memory latency it can tolerate before it stalls).

Assumption 2: Coherent flow control
We don’t attempt to model divergent branches between threads, primarily to keep things simple. This is not always true of real workloads, but it can give us a starting point. Handling divergence would be a useful extension, but if we went down that route, we’d have to know what happens to masked out waves for VMEM or export instructions. It’s possible that a masked wave might have a lower latency for these operations, but I’ve not found any docs on this.

Assumption 3: No DS instructions
These aren’t implemented yet. When they are, I’ll probably need to make some sort of assumptions about bank conflicts.

Assumption 4: Vertex fetch
If you’ve been playing around with Pyramid, you may have noticed that every AMD vertex shader begins with an S_SWAPPC instruction. This is used to invoke a “fetch shader”, whose job it is to fetch vertex attributes. The actual code for the fetch shader depends on what you specify in your input layout. Since we can’t know exactly what the driver does for this, we just synthesize a fake “fetch shader” based on the number of input vertex elements. This is done by inserting some buffer read instructions at the front of the simulated instruction stream.

We use simple models to determine how quickly wavefronts can be issued to our simulated CU.

Somebody was kind enough to provide some details from the classified console documentation. So we know that the VGT can queue up 1 new vert per clock, and can test up to 3 indices for vertex re-use.

Assuming a post transform cache hit rate of A verts per tri, we need 64/A triangles to collect a new wave, meaning we can issue a new one every min( 64, 64/A ) clocks. We assume round-robin scheduling amongst N CUs, meaning that our single simulated CU gets a new wave every N*min(64,64/A) clocks.

The vertex cache hit rate depends on the layout of your index buffer, and can range between 0.5 and 3. A value of 1 is fairly typical for optimized meshes.

Similarly, we know from various online sources that the rasterizer stamps out 16 pixels (4 2×2 quads) per clock from one triangle. The dispatch rate for PS then, depends on the average triangle size. Let’s assume that the rasterizer is smart and can pack 2×2 quads across triangles into one wavefront. We’ll launch a new wave as soon as we’ve accumulated 16 quads. Given on average p pixels/tri, this takes: 16/ max( 1, min(4, ceil(p/4))) clocks.

The instruction issue for GCN is pretty well documented, so it’s straightforward to simulate the instruction flow. There are a few grey areas which I had to make assumptions about, which I’ll describe below.

The only thing I know with any certainty is that the export rate is 16 64-bit pixels/clk, or 8 128-bit pixels/clk as stated by Miss Packman. This means that a full wave exports in 4 or 8 clocks, respectively. I’m assuming that the export rate is the same whether it’s to the parameter cache (VS) or the render backends (PS), though its possible that the two have different bandwidths.

Since I’m only trying to simulate a single CU, I have a problem when it comes to modeling the effects of an export instruction. The targets of an export instruction, the ROPs or the param cache, are shared amongst all the CUs. I have no idea what the arbitration rules are for this, but even if I did, I’d have to simulate a full GPU slice in order to model them accurately.

For the moment, I’ve opted to approximate this by assuming that exports are round-robin amongst the CUs, and also assuming that the export pipeline is being completely swamped by the other CUs, so that our simulated CU always has to wait for the worst-case amount of time. This means that the latency of an export instruction will be 4*N, where N is the number of CUs. This will probably over-estimate the cost of an export, but at least this way if the simulator tells us we’re NOT export limited, we can be pretty confident that its true.

I can do better than that by simulating multiple CUs, but before I do that it’d be nice to know how close this model is to being correct.